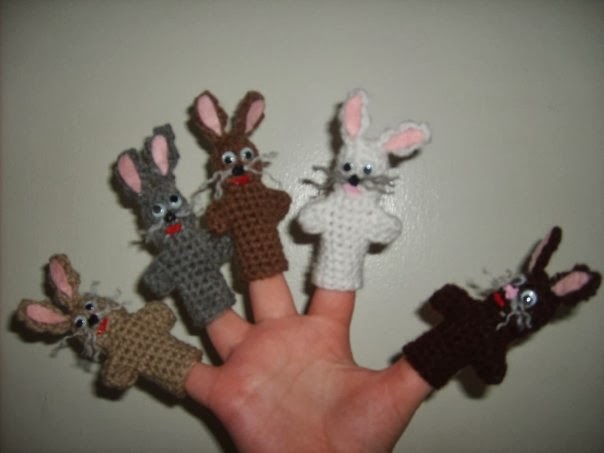 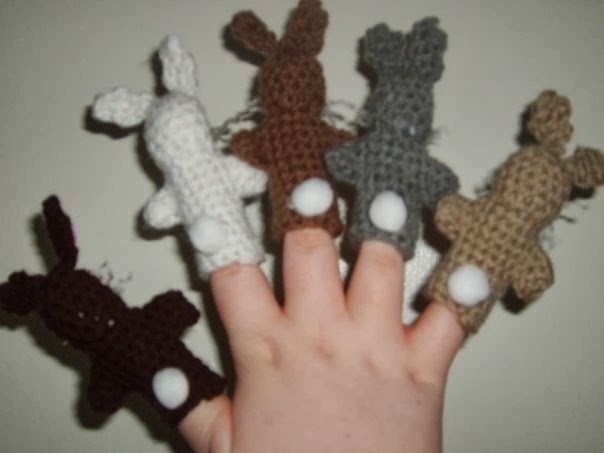 I made these finger puppets back in graduate school when I was just starting to do storytime. The pattern I used is not available on the web anymore, but here's a collection of free finger puppet crochet patterns.I like to pull these out for the rabbit storytime I usually do every April. Rabbits are one of my favorite animals.

Jenna has the round up this week.

What I thought: cute book! This was a nice addition to my underground insects storytime last summer. The illustrations are good...vibrant colors and good use of white space.

Yet another inspired by Flannel Friday. Library Quine and Lisa both inspired my goldfish. I enjoyed using different shades of yellow and orange felt as well as metallic glittery puff paint to make these fish. 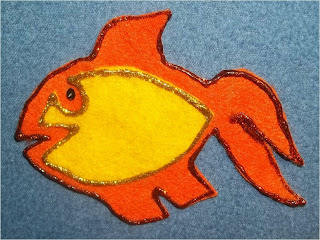 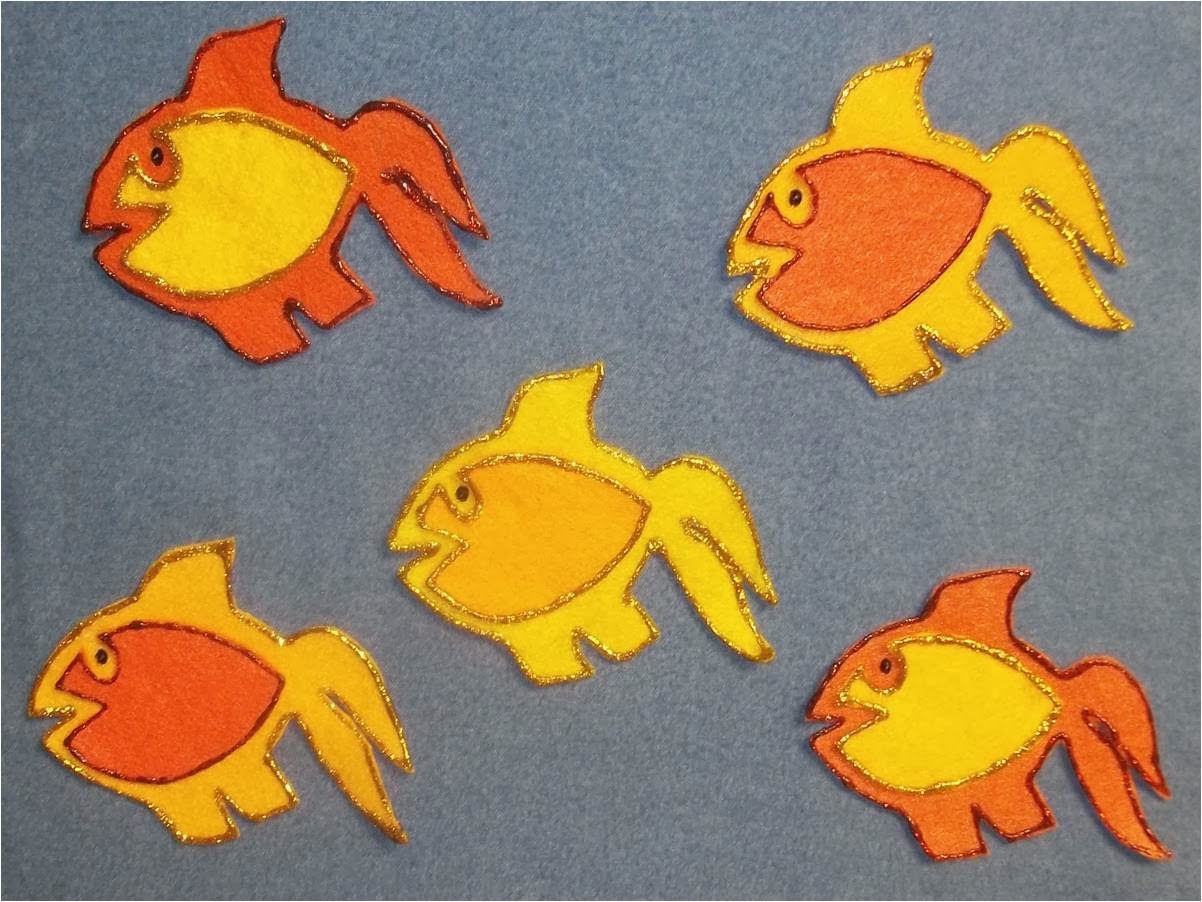 Kay has the round up this week.

The idea of a stuffed animal sleepover is one I ran across on PUBYAC while still in graduate school. This is the third time I've planned one and the ninth time I hosted one. For the first two, I held them at each of my four branches, ergo I hosted eight times.


Here's the way a stuffed animal sleepover works for me and my branches: kids bring a stuffed animal friend to a special storytime and then leave the animal for a sleepover. We hold our sleepovers on the nights when the branches are open late. After the kids leave, I (and hopefully a volunteer or two) pose the animals getting into mischief around the library. I share the photos with parents in a variety of ways. I've used Flickr, Photobucket, and now the library system's Facebook page.

When planning this sleepover, I looked back at what I'd done in the past. A few things I kept, but others I changed. Here's what I did: 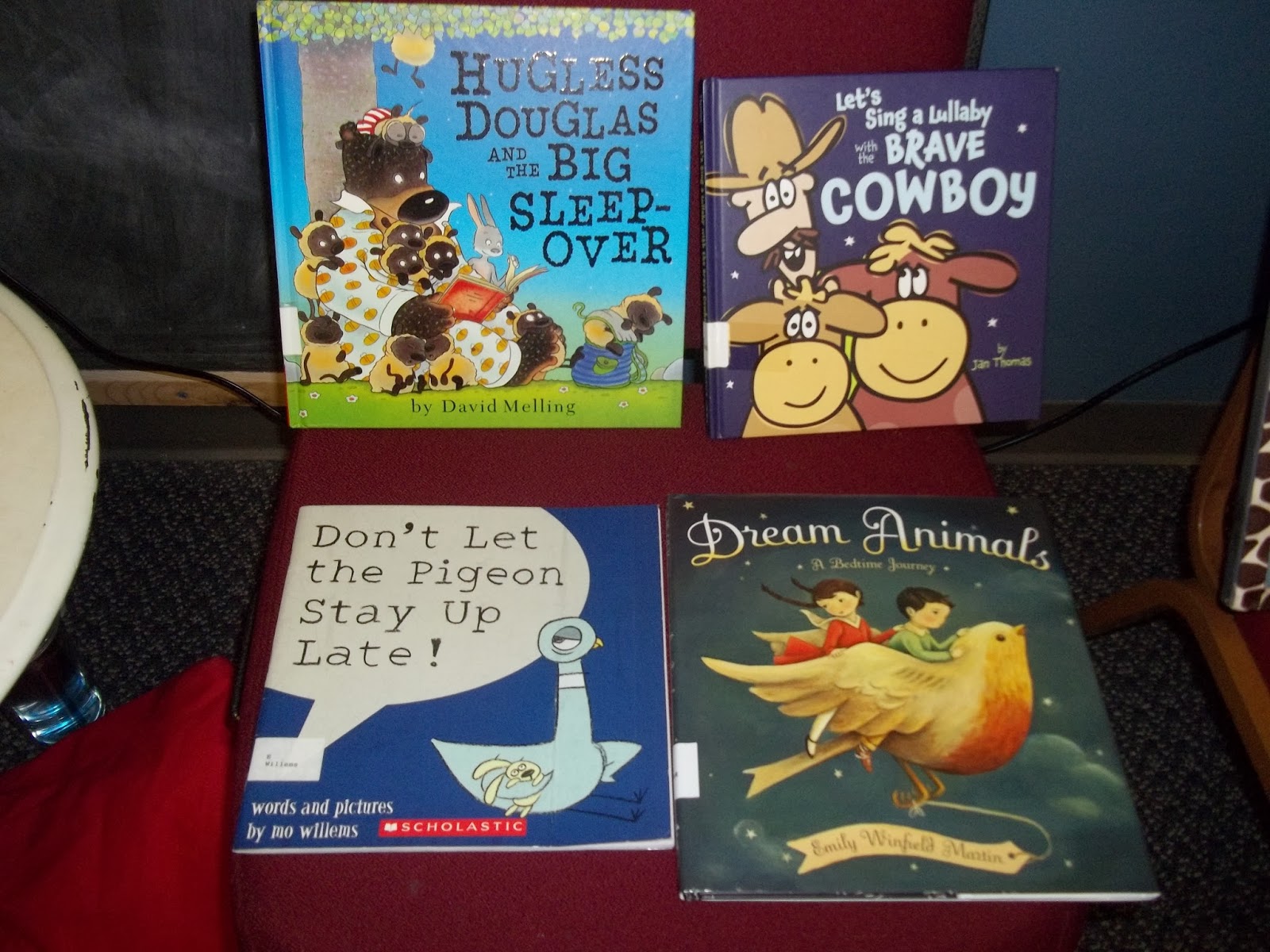 After storytime, the kids tucked their animals in and we sang them a lullaby (Twinkle, Twinkle, LIttle Star). 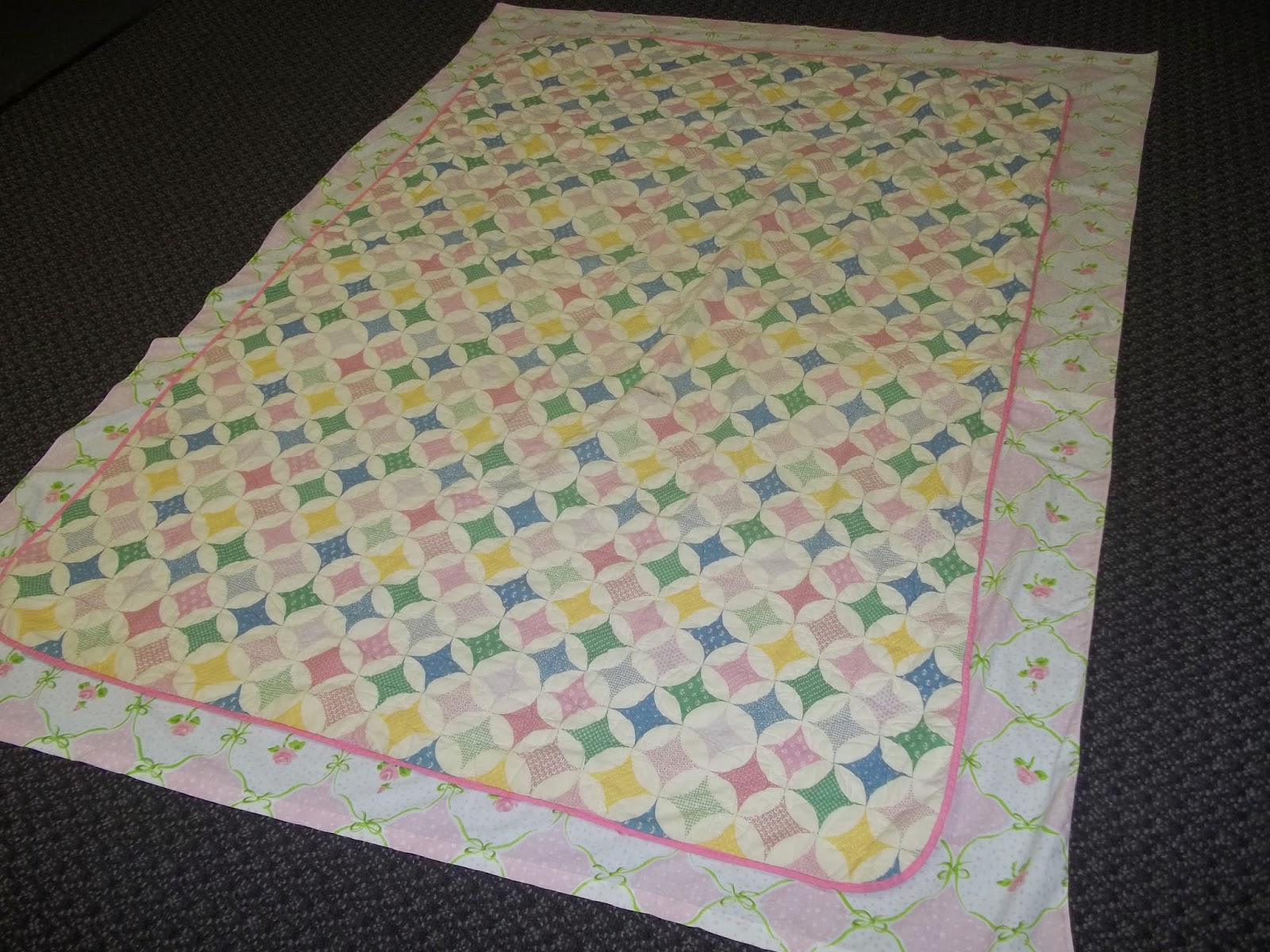 All of the books, flannels, and songs I did were well received with the except of Dream Animals. The kids were just too wiggly to appreciate such a quiet book, but I do plan on trying it in storytime again.

And here are a few photos from the sleepover. To view the entire album, you can visit our Facebook page. 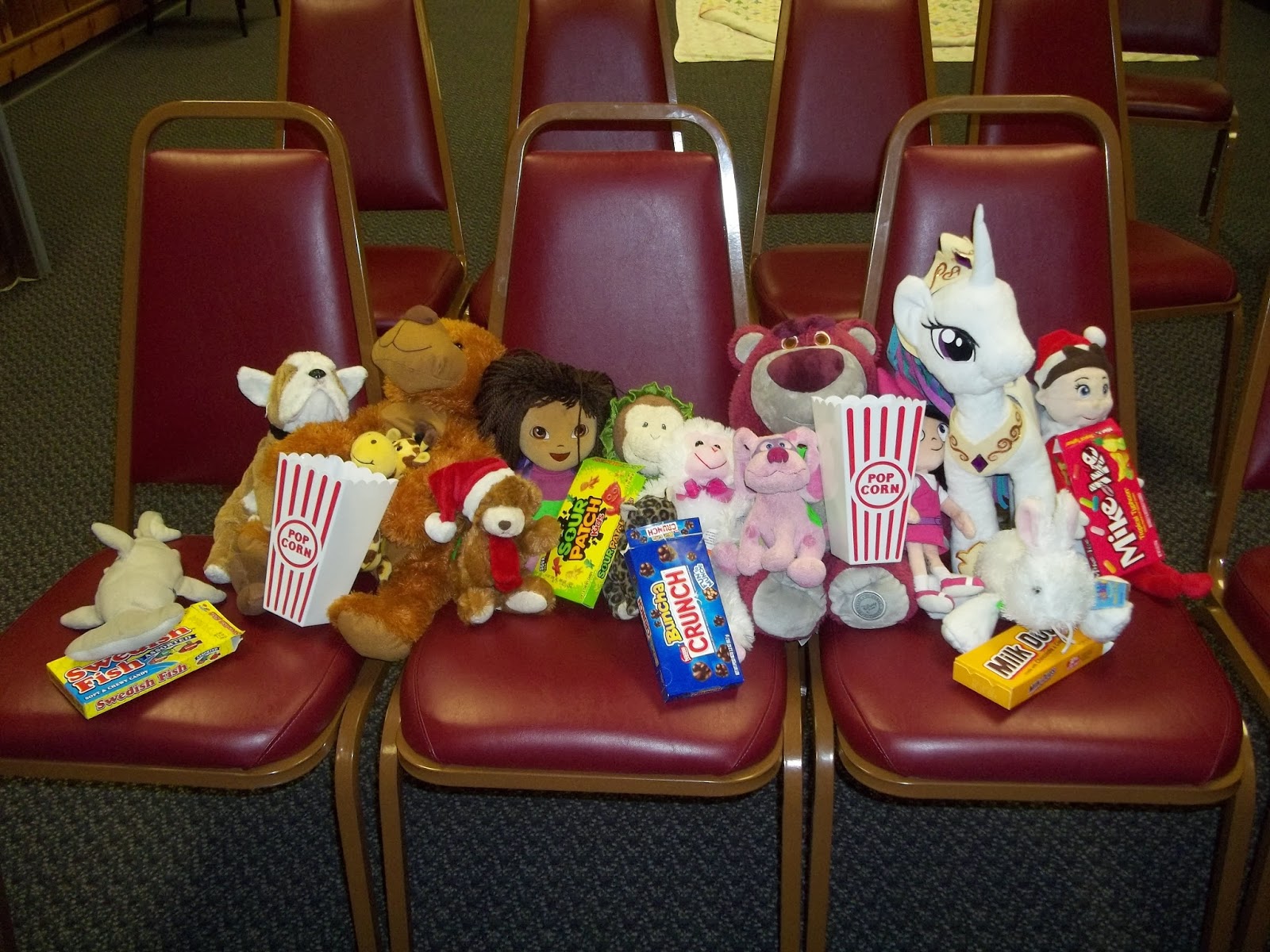 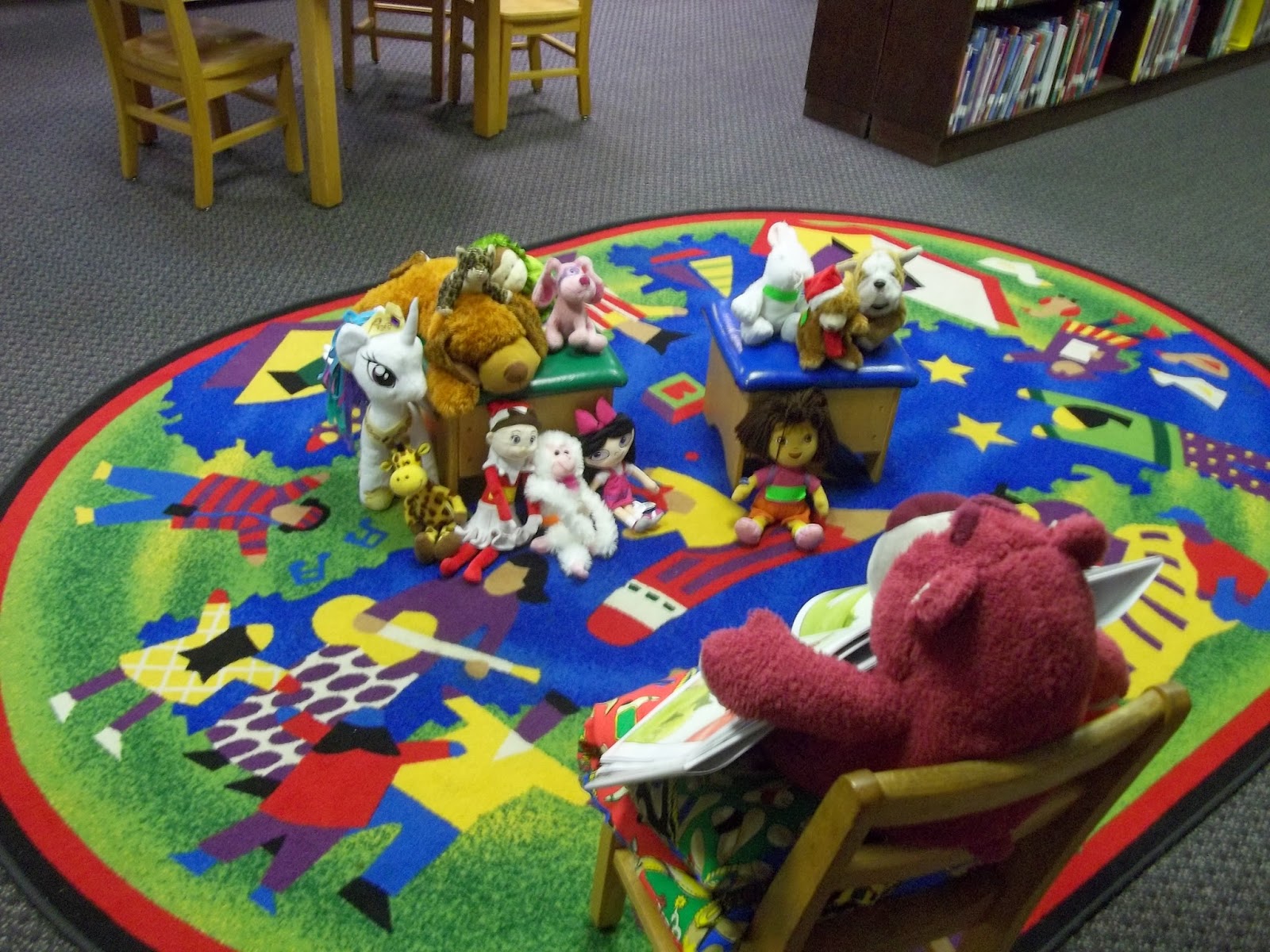 #Flannel Friday: What's In an Egg? 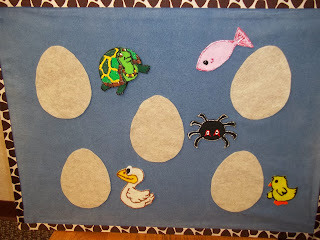 I used this set for my Eggs storytime theme in the spring. I made the eggs, but pulled the animals from other sets: the turtle from "I Made My Dog a Valentine;" the fish from One Fish, Two Fish, Red Fish, Blue Fish; the spider from "Goodnight Mummy;" the duck from the pumpkin game, and the chick from Chook, Chook, Chook, Chook, Chook.

Meg has the round up this week.

This is another inspired by Flannel Friday post. I was inspired to make this set by Erin at Falling Flannelboards. She even provided a template! I look forward to using this set with various storytime themes including houses, birds, colors, and shapes. And I just realized I didn't give my birds any wings...oh well! 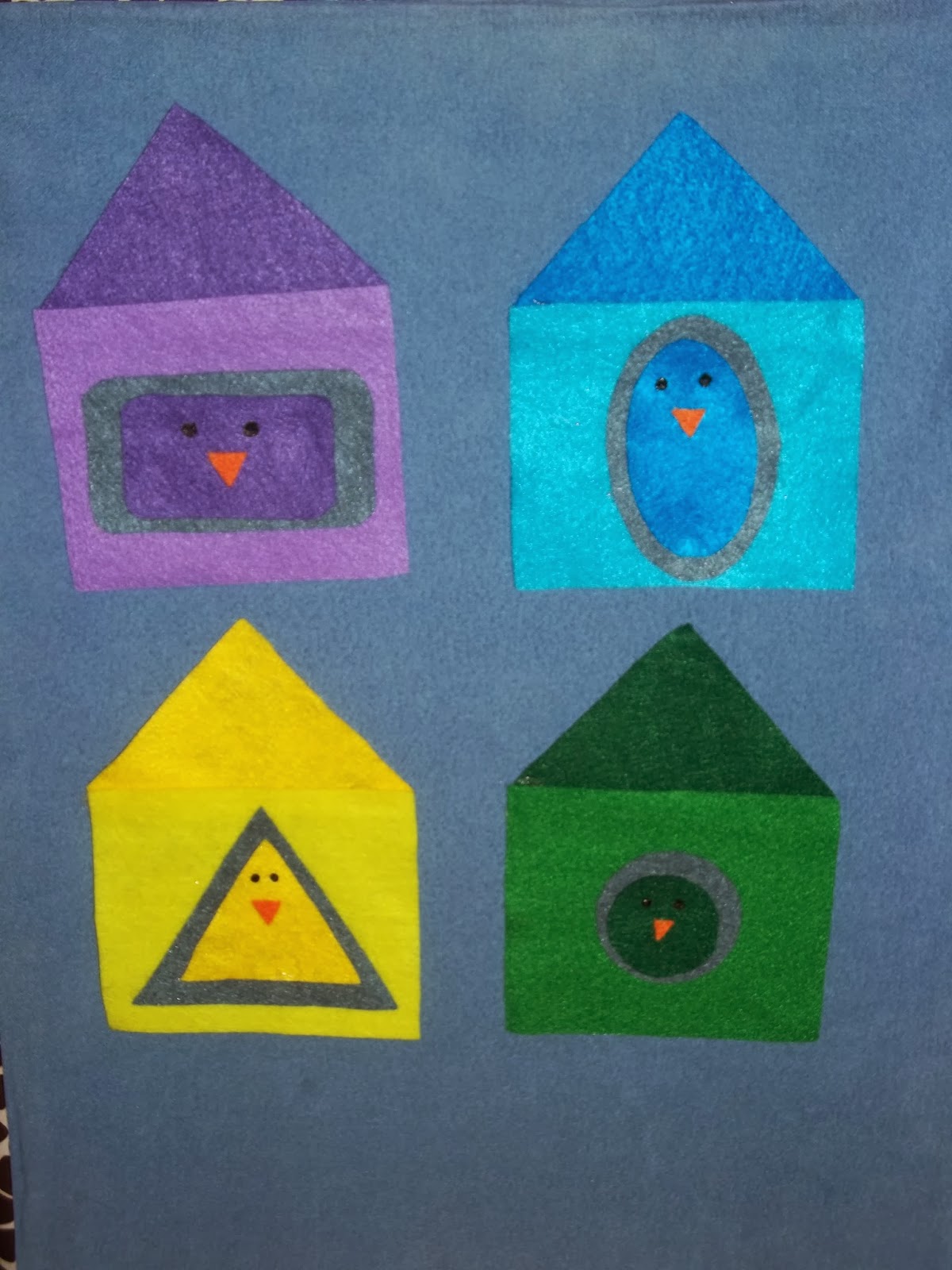 Christine has the round up this week.

I held this event at two of my branch libraries in January around the 18th (Winnie-the-Pooh Day/A. A. Milne's Birthday). The event last about an hour and a half and was for children age three and up. Children were invited to wear their favorite scarf and celebrate Winnie-the-Pooh.

We started off with a little quiz about the characters. I found questions online, in an event kit, and just made some up.

Using my crocheted bear and beehive hand puppets, I told chapter 1 of Winnie-the-Pooh, "In Which We Are Introduced to Winnie-the-Pooh  and Some Bees and the Stories Begin." 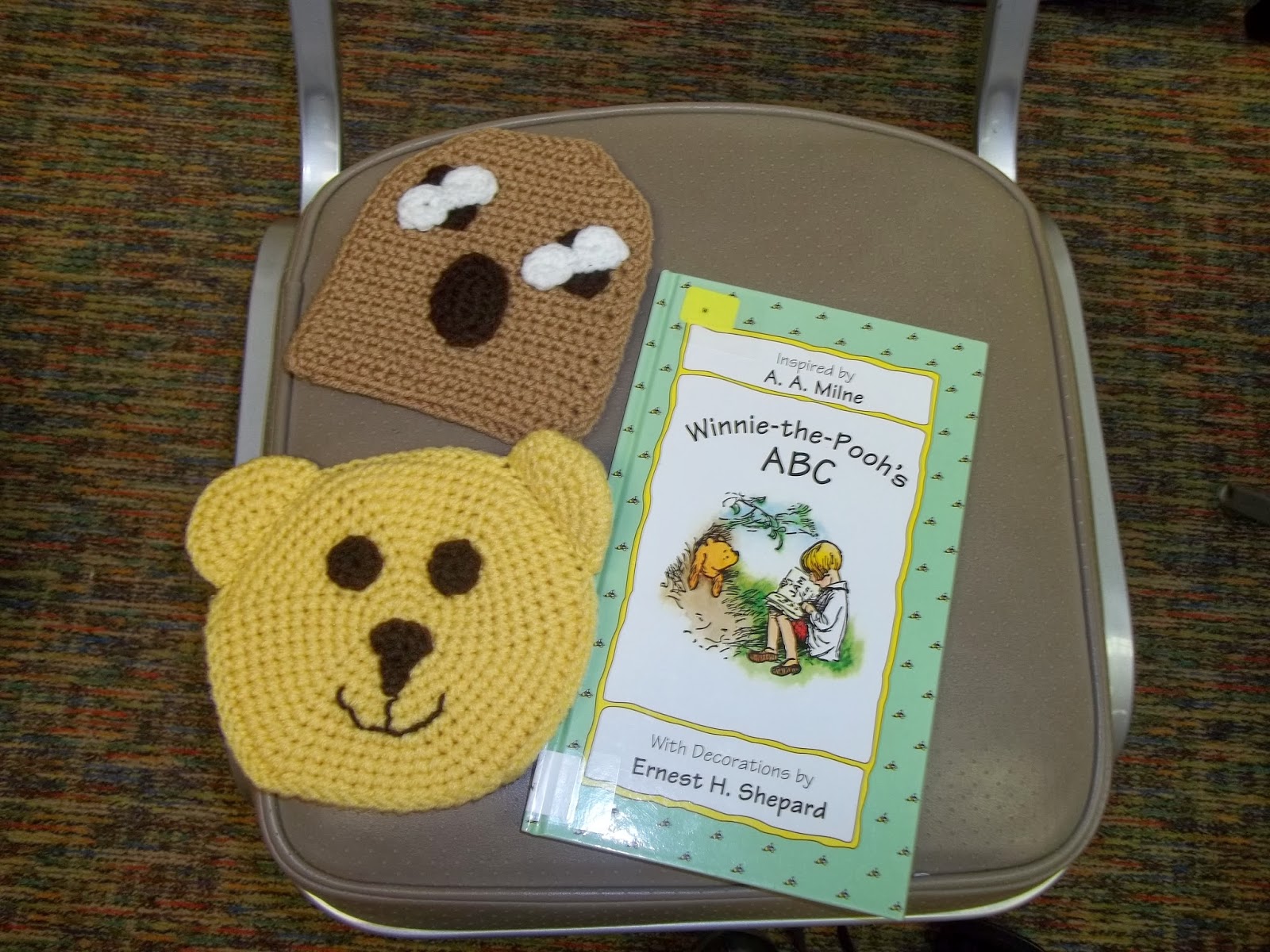 We did a couple of activities with the flannel board: bees,beehive, bear & band-aids, and Find the honey Pot. I reused these from my Teddy Bear Picnic. 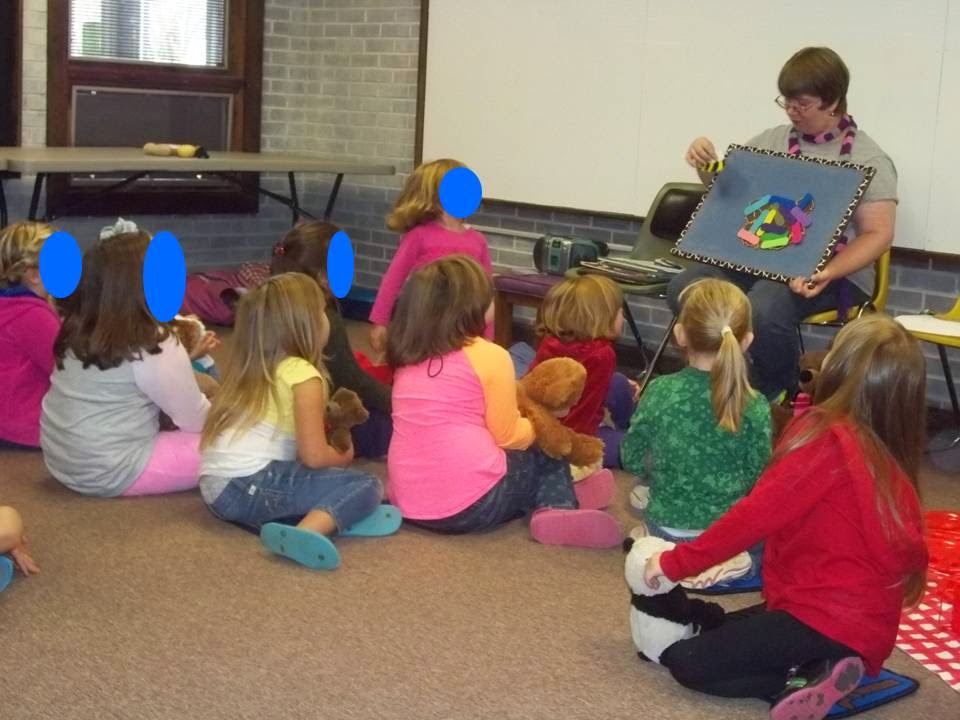 After that we moved onto other games. I found several fun game ideas on the Birthday Party in a Box website. We had a bouncing Tigger race (sack race), put bees in the garden (egg toss), a honey pot drop (gummy bears into a pot). We also played Pin the Bee on the Bear (another idea I reused from the Teddy Bear Picnic). 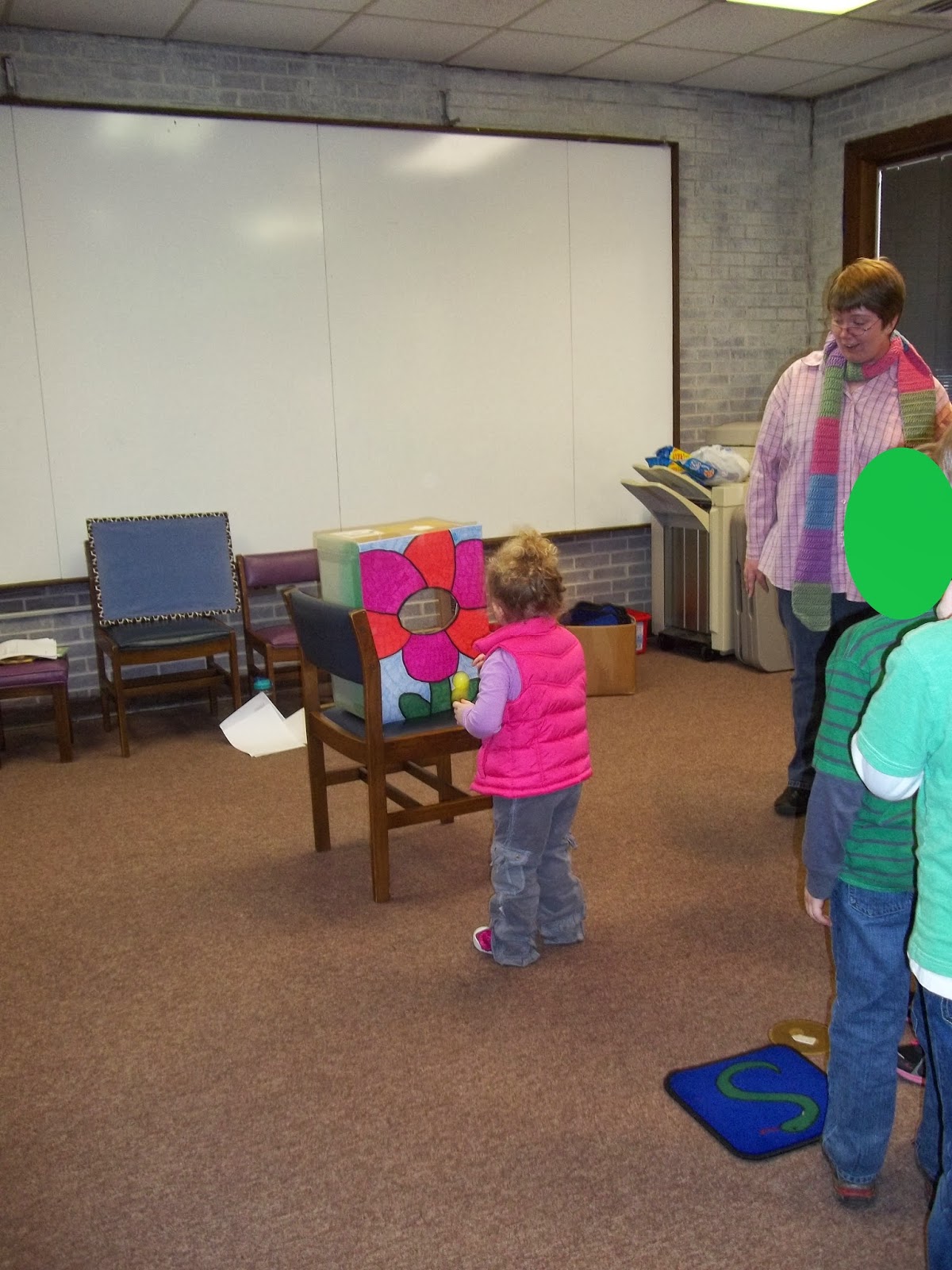 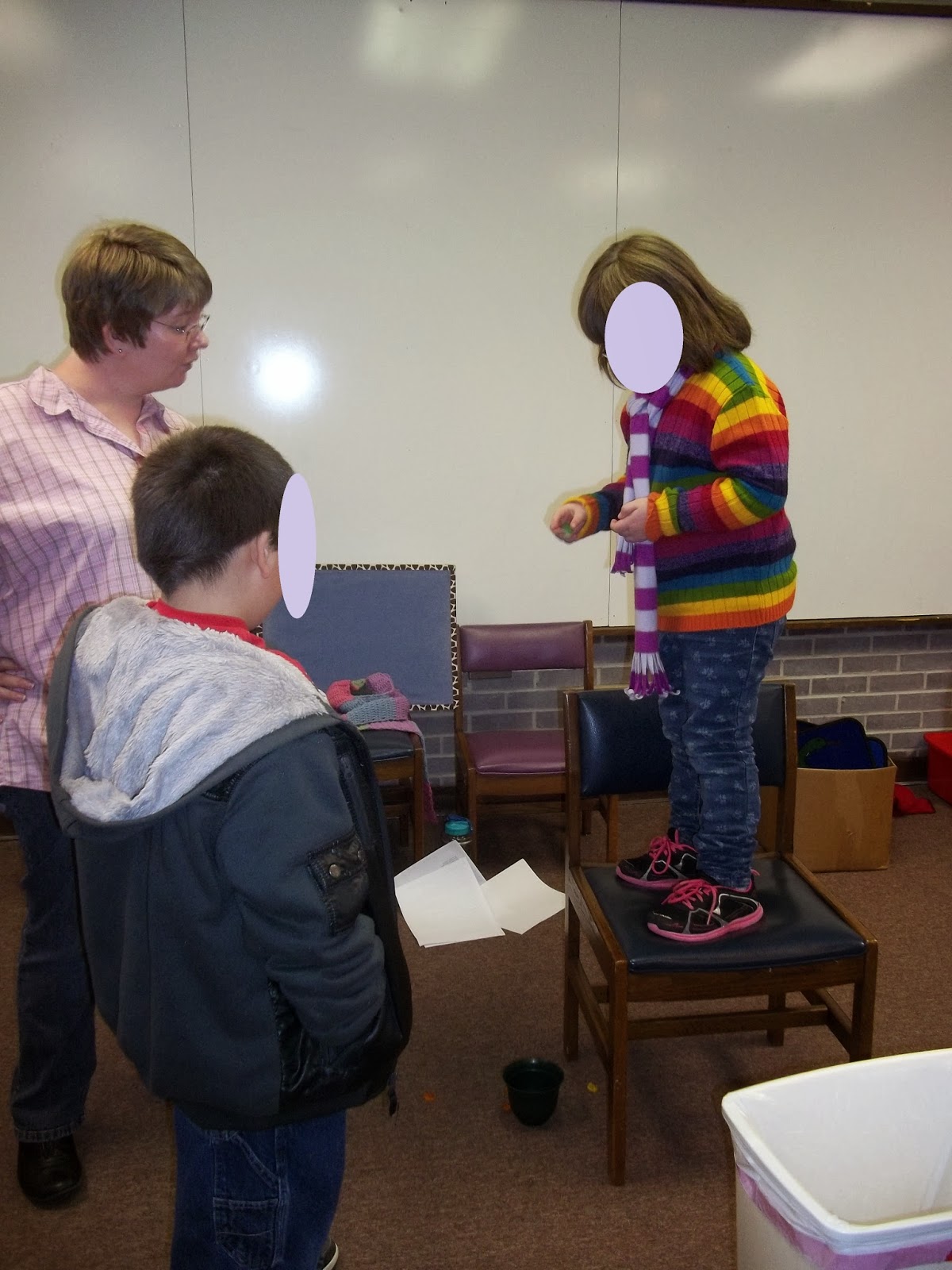 For the craft, we made Pooh stick puppets using yellow construction paper. I put out a request the Storytime Underground Facebook page and Lisa Mulvenna suggested this. 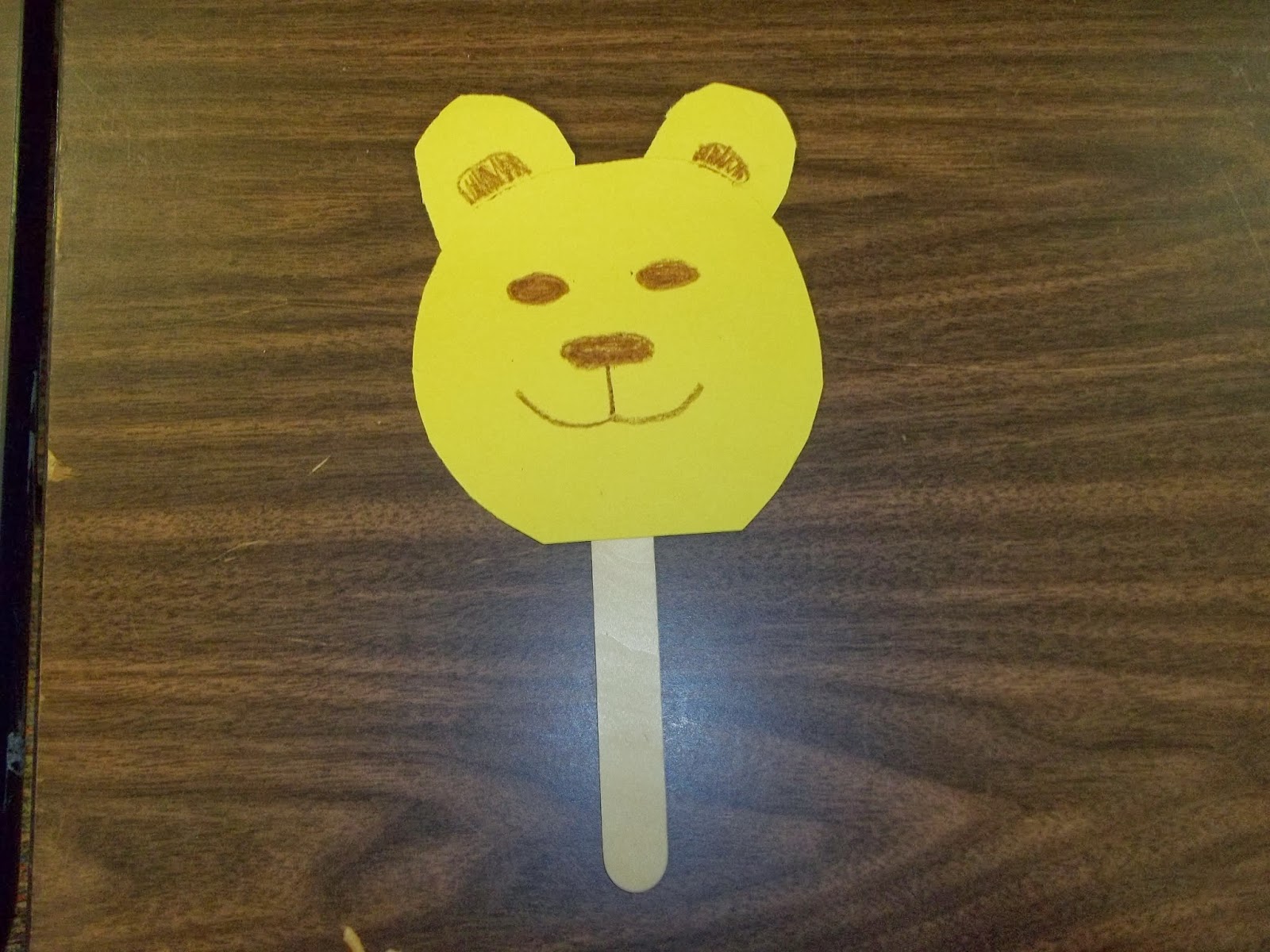 We had a simple snack and I sent the kids home with a coloring sheet and a book list (Books Similar to Winnie-the-Pooh...Animal Fantasy, Toys, etc.) I also used the book list to create a book display in the meeting room. 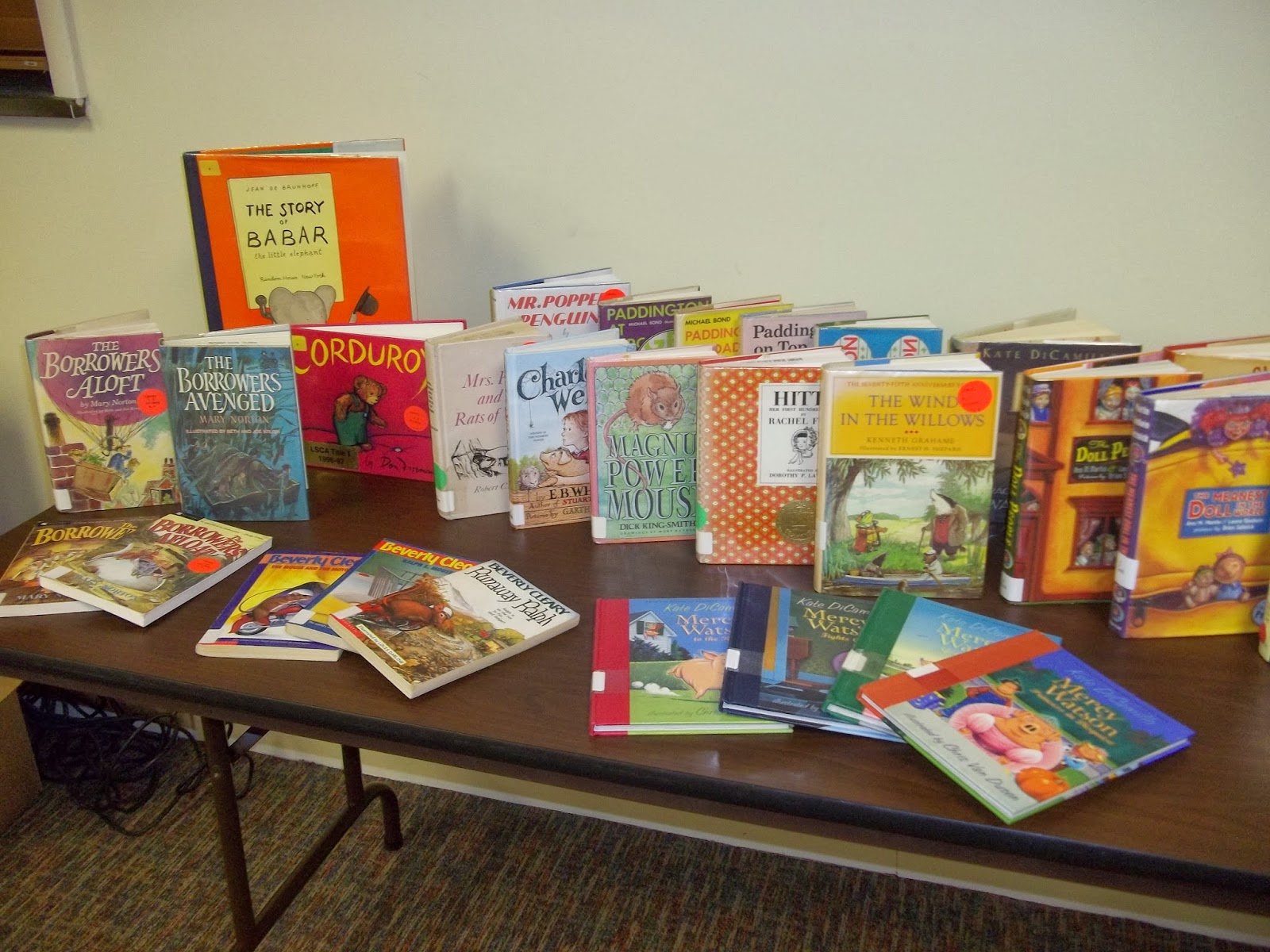 I had planned to use Winnie-the-Pooh's ABC, but didn't. I also found a fun idea from Tracey on 1234 More Storytimes...a character version of " If You're Happy and You Know It," but didn't get to use it. You can also check out my Winnie-the-Pooh Party Pinterest Board.