My posts here on the blog have been a little sporadic in the past few weeks as I prepare for the summer reading program at my four libraries. Yes, I said four!

Registration begins next week. The registration is for the reading contest portion of the program. Prompted by a post to PUBYAC, I decided to have three of my age groups (3-5, 6-8, and 9-12) count days instead of books. This summer is especially long (95 days) and if my goal is to prevent summer slide by keeping the kids reading and learning, I think counting days will do it. The kids get credit for each day they read or listen for 20 minutes and their goal is 48 days. The 0-2 group will be using the early literacy log from the Upstart CSLP catalog. Teens (13-18) read 5 books within the time frame.

My program is going to last 10 weeks this year. Having registration on the same day as the first set of events and awards on the same day as the last set of events was a bit hectic last year. So the first week will be registration for the reading contest. The next eight weeks will be weekly events for two age groups (0-6 and 7-12). The tenth week will be the presentation of certificates and grand prize drawing. I will have one prize for each age group (0-2, 3-5, 6-8, and 9-12) at each location. I'm giving three prizes at each location for the teens.

Here are the events I have planned for the summer. Links are to the agendas on my program wiki. I have not tested these story times or school age events yet so they are subject to change. The special events and teen events are still works in progress. Enjoy!

I crocheted these flowers using an original pattern. The centers are yellow pompoms. There are numerous 5 little flower rhymes on the internet that you can use with these. I used these when I did a flowers story time. I plan to use them this summer for my Digging in the Flower Garden story time. ﻿ 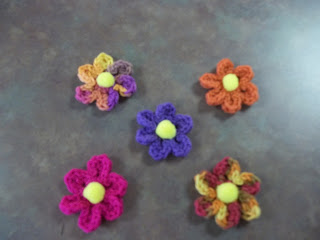 Angry Birds Playground Animals: An Around the World Habitat Adventure by Jill Esbaum

Characters from the popular game take readers on a habitat adventure as they search for their stolen eggs.

What I thought: This is a fun book. The birds' comments are great and really make a game out of learning about different habitats and animals. The pictures are great--just what I would expect from National Geographic. The extra material at the end of the book (Animal Map, Quiz Time!, and Bonus Activities) extended the fun. I think using a popular game to encourage kids to learn is a wonderful idea.

This Moose Belongs to Me by Oliver Jeffers

Wilfred has a most unusual pet, a moose he call Marcel. Marcel followed the rules most of the time and Wilfred is content with his pet. But one day, someone else claims Wilfred's moose as their own. What's a boy to do?

What I thought: There's nothing like a good moose story. This Moose Belongs to Me is hilarious. What makes it so funny is Wilfred is quite serious about his rules. The illustration nice, saturated colors. I would pair this with Me & My Dragon and A Pet for Petunia for an unusual pets story time theme.

The friends Squid and Octopus appear in 4 stories (The Quarrel, The Dream, The Hat, & The Fortune Cookie) and prove that it is possible to be friends for always.

What I thought: Like Bunny Days, this book features four individual stories. I like Squid and Octopus very much. I love that Squid knits hats (though crochet would be nice!). The illustrations are lovely. I like the colors Nyeu chose--definite ocean feel with a retro touch. My favorite illustrations are tea party and true friend (last page). I'm not sure how this book will work for story time. The illustrations have a lot of detail that the kids probably won't catch just having the book read to them. I'll let you know.

#FlannelFriday: What Would You Give As a Gift?

This is a found flannel set. I first used it for a Mother's Day story time a few years ago. I pulled one of each of my crocheted magnets from my five little whatever sets. During story time, I ask the kids what they would give their moms as a present. Some of my suggestions are silly (a turkey) while others are perfect gift options (cupcake, cookie, flower). I love getting reactions from the kids. I haven't tried this with the flannel board yet, but you can pull out anything you have and use for this activity. I've also used this activity for a grandparents story time. It would work well for a friendship story time and a birthday story time.
﻿ 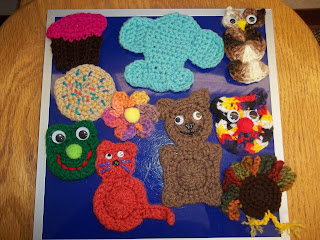 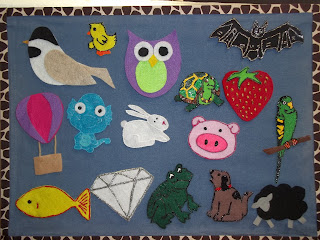 Summary from Dust Jacket: Because Amelia smiles as she skips down the street, her neighbor Mrs. Higgins smiles too, and decides to send a care package of cookies to her grandson Lionel in Mexico. The cookies give Lionel an idea, and his idea inspires a student, who in turn inspires a ballet troupe in England! And so the good feelings travel across the world, inspiring ever more smiles, kindness, and love along the way.

What I thought: Because Amelia Smiled is such an inspiring book. I love that the story come full circle. I think this book would be best shared with older children (say first grade and up) to really get the full impact. Stein's illustrations are lovely as usual.

A Home for Bird by Philip C. Stead

Vernon the Toad finds a new friend one day, Bird. Bird doesn't talk, but Vernon is determined to find Bird a home where he will be happy.

What I thought: Such a sweet story with charming illustrations. I will definitely be using A Home for Bird for my next friendship themed story time. I love the color in the illustrations.

This Flannel Friday post was inspired by Melissa Depper, the awesome librarian and author of the blog Mel's Desk. Mel posted about her Mix & Match Cinderella on June 8, 2011. I tagged the post because it was a neat idea. As I began planning my Cinderella Around the World event, I remembered her post. Via Twitter, Mel and I discussed me adapting her idea to a flannel board felt set. She even gave me permission to use her photos as templates. Again with the awesomeness!

It took me a week, but I finally completed the 16 pieces. The background squares are roughly 6 inches squared. I tried to keep the puff paint to a minimum. To create some of the effects, I used craft sticks, toothpicks, and even a mascara brush. 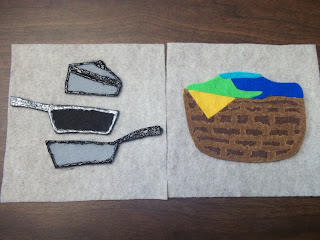 Pots & pans,  from the traditional French & Appalachian versions
Wash the linens in the river, from Egypt 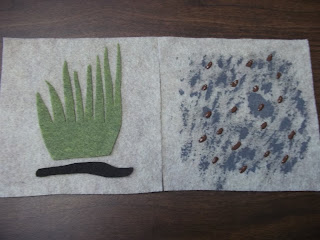 Weed the rice field, from Korea; Pick lentils out of the ashes, from Germany 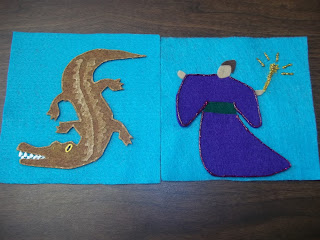 Crocodile, from the Philippines and Indonesia; Fairy Godmother, from France 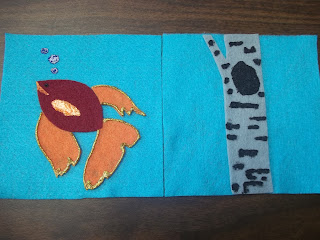 I used Mel's photos as templates for the crocodile, fairy godmother, and fish. I used an illustration from the book Glass Slipper, Gold Sandal: A Worldwide Cinderella by Paul Fleischman and Judy Paschkis for the birch tree. 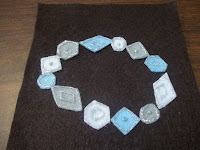 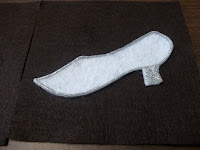 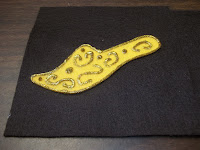 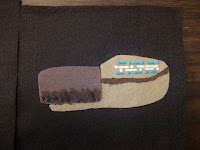 I used an illustration from the book Glass Slipper, Gold Sandal: A Worldwide Cinderella by Paul Fleischman and Judy Paschkis for the glass slipper. I used Mel's photo as a guide for the diamond anklet and designed my own version.  I used Mel's photos as templates for the gold sandal and moccasin. 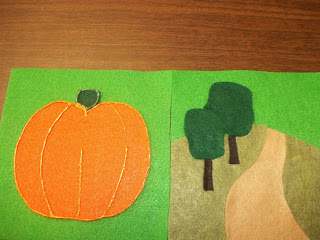 Pumpkin coach, from France; Walking, from many versions 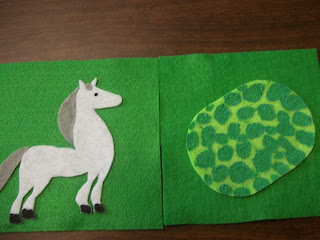 Horse, from Finland; Breadfruit coach, from the Caribbean
I used a coloring page as a template for the pumpkin and Mel's photos for the road, horse, and breadfruit.
The girls really liked this activity. The ages at the event were slightly younger and they mostly wanted to pick the options they were familiar with, but we had fun. I think I might use this set again at my Fancy Nancy Party tomorrow.
Again another big Thank You to Melissa Depper for letting me borrow her idea.
Posted by Bridget R. Wilson at 6:00 AM 2 comments:

Spike, the Mixed Up Monster by Susan Hood

Summary from Dust Jacket: Meet Spike! He's pointy. He's scary. He has a spiky crown. He has mean teeth. He is a monster...no bigger than a lily pad. What will it take for Spike to make a friend?

What I thought: A fun book! I love that it's bilingual. Although I wish there was a pronunciation guide. The illustrations are lovely--bright and colorful. I can't wait to use this title in my monsters story time in October. I think it will pair well with Leonardo, the Terrible Monster by Mo Willems.