Here's the round up for November 22. Lots of great contributions...Thanksgiving ideas, animals, teeth, and a song to mention a few.

Emily shares her first ever Flannel Friday post: We're Looking for an Animal That Starts With... It's a hiding game similar to Little Mouse, Little Mouse, but you can use it with various animals.

Christine brings us a felt set for The Wheels on the Bus.

Katie F. shares a Google Drive presentation she created for The Elephant and the Bad Baby by Elfrida Vipont.

Jenna brings us a felt version of Henny Penny.

L. Thacker brings us a Which Fish? felt set.

Tara is on a roll this week with 2 posts. The first is for several Thanksgiving themed felt sets. The second is filled with teeth flannel board ideas.

Kay has the round up next week. 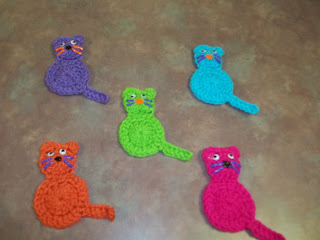 These are crocheted cat magnets to use with my small magnet board. I made up the pattern myself. The body is one piece, the head is one piece, and then you sew them together. Here's a link to the pattern. I normally use these when I do my Dr. Seuss storytime, hence the wonderfully bright colors.

And here is an original rhyme to go with the cats:

I have the round up this week.

Happy Thanksgiving Flannel Friday Round Up! 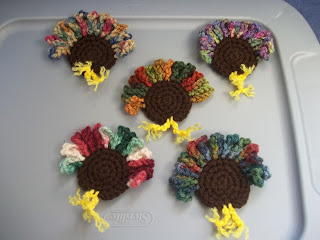 As you can see, these are crocheted turkey backside magnets. I used this pattern and use my turkeys with a variety of "5 Little Turkeys" rhymes.

Tracey has the round up this week.

For Teen Read Week (TRW) I planned and hosted a Life Size Clue event for the teens at one of my library branches. I was lucky enough to receive one of the ten TRW grants through YALSA and the Dollar General Literacy Foundation to fund this event.

The TRW theme this year was "Seek the Unknown." That paired with several of my regular teens' interest in crime and mystery TV shows, prompted me to plan the Life Size Clue event. I found inspiration online from GreenBean TeenQueen, Abby the Librarian, Wandering Through Words, eHow, and Wikipedia.

Following the advice of several librarians who had put on this event in the past, I only included six of the nine rooms (kitchen, dining room, conservatory, lounge, billiard room, & library) on the game board in my life size version. With the help of my intern and work study student, we put down the game board in a little over an hour. I printed up the room signs and indicated any secret passages on them. The players' starting squares were indicated by colored paper. Both these and the room signs were taped down with masking tape. 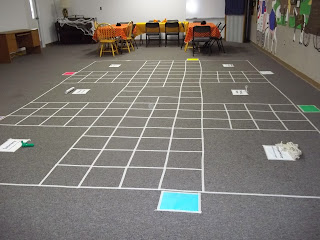 For the weapons, we used a toy knife, a toy gun, a glass candlestick holder from the Dollar Tree, a small wrench from my car's toolkit, an aluminum foil covered paper towel tube for the lead pipe, and rope from a plant hanger.

For the player props, we found bandanas that suited their names except for Mr. Green. That prop was oversized green glasses from the Dollar Tree. 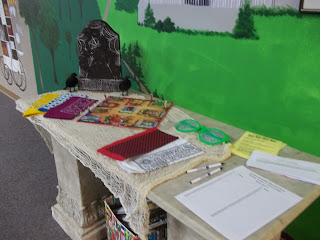 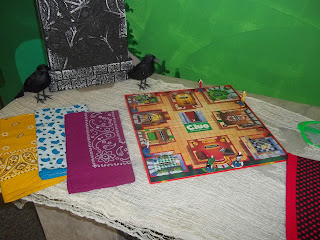 Before we began playing, we fed the teens pizza, goldfish crackers, cookies, and soda. 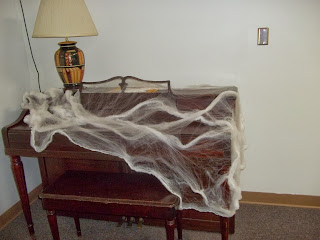 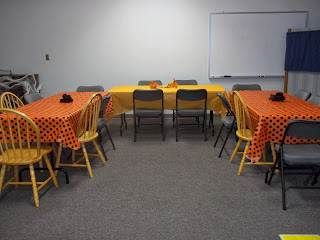 After eating they picked teams. We had 12 attend so we had six teams of two. One person was the game piece. The other kept track of the cards, the dice, and the case sheet. 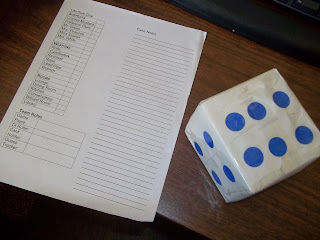 In the middle of the game board (the hall on the actual game board), we had the murder scene, the confidential case file and a bloody handkerchief...proof that Mr. Boddy was indeed murdered. 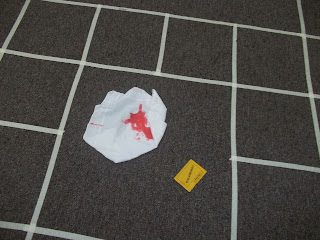 We followed the board game rules. We managed to play three and a half times in two hours. Winners got to choose a prize (DVDs, duct tape, candy bars).

I used part of the grant funds to add new mystery titles to the YA collection. These were displayed in the meeting room along with a book list. 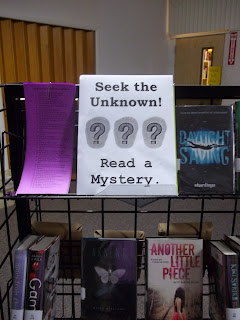 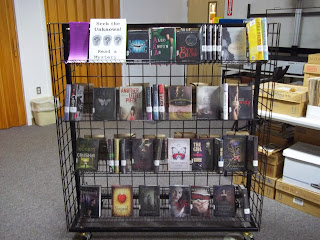 I also did a blind date with a book display to further encourage teens to "Seek the Unknown." 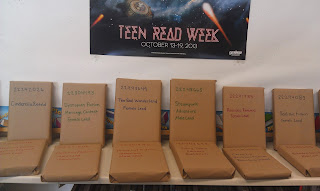 Before leaving the teens all filled out a short survey for me. I asked questions about their enjoyment of the program, how likely they would be to come to another event, when was the best time for them to attend programs, and for any program suggestions.

In October, I hosted a Mouse & Friends Party at two of my library branches. The party was all about Laura Numeroff's If You Give...book series. 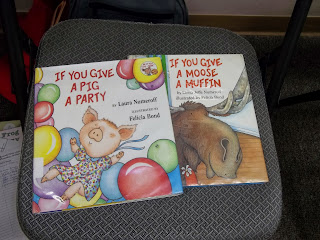 The event started off with storytime. I read If You Give a Pig a Party because it introduces all the characters, those with books and without (Mouse, Moose, Pig, Cat, Dog, Rabbit, Fox, and Snake). Then we played with my If You Give... felt set. 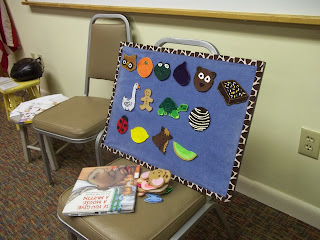 After that I read If You Give a Moose a Muffin. I chose this title as it's good for the fall season. After reading that book, we wrote our own circular stories using a template I found online. The template wasn't perfect, but we had fun with it.

Then it was time for a group game or two. I had three options for the kids to choose from.

If You Give...Bingo (used the word list from my felt set and Print-Bingo.com to create randomized order. I added clipart using Microsoft Word) 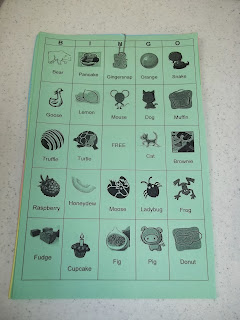 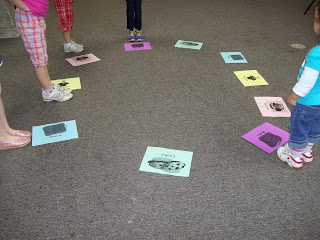 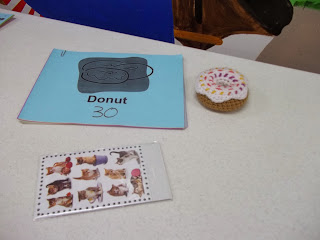 After the group games, we did a craft: moose paper bag puppets. I found the idea here. 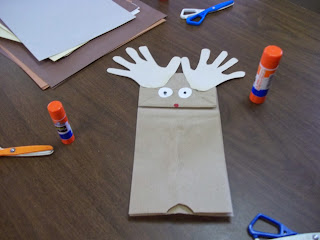 Following the craft, I releases the kids to the following stations: 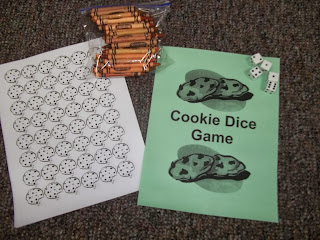 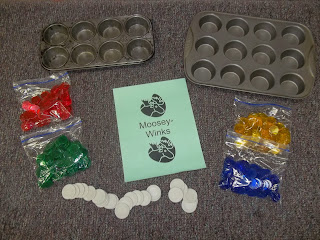 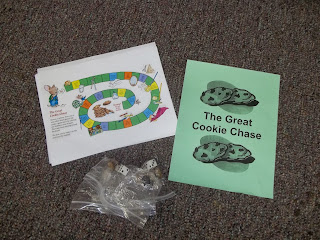 We enjoyed refreshments. The kids could check out books from a Laura Numeroff & Other Circular Stories Book Display. 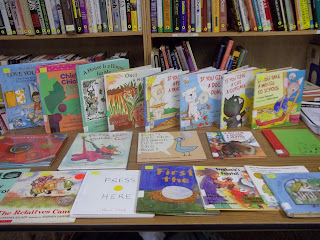 I sent the kids home with a packet of activity sheets from the MouseCookieBooks website (Decorate Your Own Cupcake, Make Your Own Donut, Dog's Memory Challenge, Help Pig Add Some Color to Her Party, and What's a Party Without Cake?) 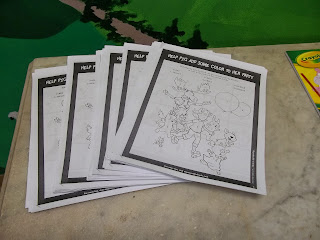 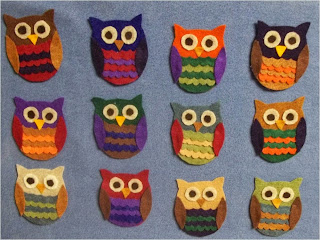 I used a pattern I found on the Bugs and Fishes by Lupin Blog. I made twelve only because that's how many fallish colors I had to use for bodies. I'll only be using five or ten at a time, but I like options. These a small and five will fit on my small handheld flannel board. All felt, no puff paint, just a lot of hot glue and a few burnt fingers.

This is the third set of owls I've made. The first was back in 2010 and they were crocheted. The second set was last summer during the "Dream Big--Read" 2012 Summer Reading Program. This blog post shows a picture of both those sets.

Lisa has the round up this week.